L is for Lake Winnibigoshish 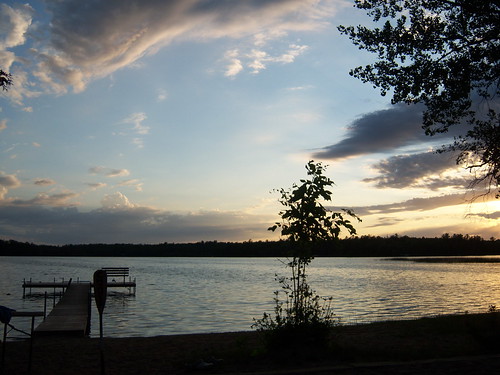 I thought I was too old for family vacations. I wanted to stay home, alone, while my parents took my five siblings. Dad wouldn’t say where we were going. He had never done that before–not told us.

But Mom insisted I not stay home alone. I don’t think she thought I was going to do something stupid–I wouldn’t have dared do anything I knew would make Mom and Dad angry. But to me it was a matter of whether or not they trusted me. I would turn 16 in the fall. I had been babysitting for my brothers and sister for six years. Surely I could take care of myself for a few days.

Somehow we squeezed all eight of us into the car. Mom and Dad and my youngest brothers, the twins, in the front seat. The rest of us kids–all four of us–filled the back seat. There was no room to spread out. We were shoulder to shoulder, me at one end, sulking.

Every summer Mom and Dad took us on a camping vacation. It was the only way to afford putting up two adults and six kids overnight for a week at a time. Because we filled the seats, Dad built a box for the car top carrier to stow the tent, stakes, camp stove, and other items that could survive both rain and sun beating down on them. After the first trip, he modified the front of the box so that it slanted towards the back, to improve its aerodynamic qualities.  A single-wheel trailer held whatever clothes we needed. Food–prepared at least a week in advance and much of it frozen to keep from spoiling–stuffed in freezer boxes and thermos containers filled the trunk.

We almost never went the same place twice. And that’s why I was sulking. We had already made a trip to Lake Winnibigoshish, Lake Winnie for short, at a time when my mom’s sister’s family was also there. That meant I was able to spend my time with my cousin Lois instead of my younger siblings. Lois’s parents and a couple of their neighbors had bought an old school bus and transformed it into a camping van. The families that shared the ownership also shared the use, one family at a time. But even with those constraints, many times the bus was not used. All the owners were farmers who didn’t have the luxury of being able to pick any week to go off fishing. The cows and crops needed tending on their own schedule.

That first week at Lake Winnie, Lois and I also spent time with Dale, the son of the family who owned the resort where we rented camp sites by the week. Another teenaged boy worked at the resort, too. In the evenings, the four of us played cards in the A-frame building that served as the office as well as the summer home of the owners.

I wanted to go back to Lake Winnie. I told Dad that’s what I wanted. But Dad wouldn’t tell us what his plans were. The direction we headed out and the highway our trip started on weren’t clues either, unless we headed west into North Dakota, which was not a destination but rather just a state we had to get through on our way to somewhere else.

Dad headed east and then north. I’m sure the boys–two in the front seat and two in the back–found some excuse for poking one another, provoking a response to which “he started it” could be declared. And still I sulked.

An hour passed and still Dad kept driving. We were deep into Minnesota lake country by this time. With more than 10,000 lakes in the state, I still didn’t know where we would end up. Dad could turn off the highway at any time. But he kept driving.

Another half hour passed before Dad headed off the State highway down a county road. At that point, things began to look familiar. We had been here before. And it wasn’t long ago. Dad had turned down the drive leading to the Lake Winnie camping area we had been at earlier that summer.

I smiled. Dad smiled. Mom smiled. I may even have thanked Dad. I hope I did.

4 responses to “L is for Lake Winnibigoshish”