K is for Keren 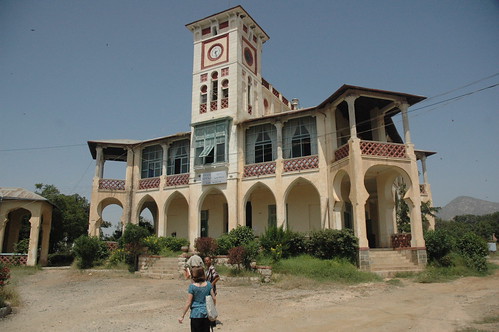 Lisa, a teacher from Texas at the Asmara International Community School, introduced me to Keren, Eritrea. Or perhaps it was Keren that introduced me to Lisa. It happened in the Keren Public Library.

Once a month, Lisa and her daughter went to the Keren Public Library where the US embassy had set up an American Corner. These spaces in public places exist in towns too small for an American consulate, where information about the United States is made available for the local population. Often a computer terminal connected to the Internet is the centerpiece. No American staff members work at American Corners. Instead, a local staff member from the place, often a library or a university, agrees to assist those visiting the American Corner find information. In many American Corners, discussion or cultural programs are hosted.

Keren is the second largest city in Eritrea, situated within 60 miles from Asmara. It was the site of many battles during World War II and the Eritrean War of Independence. One attraction in Keren, St. Maryam Deari chapel, located inside a beobab tree, marks the site where Italian soldiers hid during a battle with the British in 1941. The tree was hit, and the hole in the tree can still be seen, but the soldiers survived.

Another attraction, at least for me, is the camel market, held each Monday.

But my fondest memories of Keren are of Lisa and her kids at the Keren Public Library. One Saturday each month, an embassy driver picked up Lisa and her daughter for the trip to Keren. Lisa invited me to come along. We got started late that Saturday so I asked Lisa what would happen if we didn’t arrive on time. I worried that the children might leave if we weren’t there on time. She assured me that nothing would happen until we arrived. She, it turned out, was the program in Keren. The children all waited for her. And when it was time for her to leave, they stayed at her side, holding her hands, her arms, her shirt, attempts to keep her there longer.

Armed with a cassette tape player, cassettes of songs used in American early childhood education programs, children’s books, and posters containing enlarged drawings from some of the books, Lisa performed with a group of 20 kids ranging in age from four to 14. She called it a class. I felt it was much more.

She got them all up on their feet to sing and dance along with the songs. Even the older ones enthusiastically joined in as they sang “I’m a little teapot, short and stout . . .” They all placed on hand on a hip with “Here’s my handle . . .” and raised the other hand with “And here’s my spout.” After they sang the song, Lisa asked questions about teapots, tea, and anything else the children’s answers raised.

My favorite part of the program involved Lisa handing out posters of the drawings from the book Brown Bear, Brown Bear, What Do  You See? by Bill Martin Jr. and Eric Carle. The children with the posters lined up in the order the animals appear in the book, and they held up their posters for the rest of the children to see when Lisa mentioned their animal as she read the book.

After Lisa finished reading the book to them, the children with the posters recited the book pages themselves. All of the children recited the first part of each page, “Brown Bear, Brown Bear, what do you see?” The child holding the drawing of the brown bear then answered, “I see a [black bird] looking at me.” And so it went, not necessarily in the order of the pages in the book. The variation ensured that every child in the room listened carefully to know which animal they next would ask the question. A second set of children then took their places and repeated the exercise.

As I watched the performance, I conjured up a continuation of the lesson for Lisa, one where the students might have to give up the rhyme of “see” and “me” by replacing “you” with “he,” “she,” or “we” in the question and then replacing “me” with “him,” “her,” or “us,” as appropriate.

On the Saturdays Lisa wasn’t in Keren, she conducted two of the same classes in Asmara at the American Cultural Center. She repeated the class each Saturday so that all of the more than 100 children who wanted to take part could attend one.

Lisa’s program wasn’t something the US embassy asked her to create. It was an idea based on her passion for sharing language and learning with more than just the two dozen children in her elementary school classroom at the Asmara International Community School. She started out hoping to establish a children’s story hour like in libraries in Texas she had brought her daughter to before her daughter reached school age. She asked for permission to invite the children of US embassy employees. On that first day, a dozen children arrived. The next week, she was surrounded by children who lived in the neighborhood who asked if they, too, could join the class.

Reading to children and encouraging them to learn to speak English was not Lisa’s only passion in Asmara. She noticed many children in her own neighborhood did not have shoes. Lisa approached the owner of a shoe store in Asmara and arranged to pay him for shoes in exchange for a coupon she printed and gave to children whenever she saw one without shoes. Each month she received a bill for the number of pairs of shoes she had given coupons for.

Lisa’s willingness to immerse herself into the lives of the people, especially of the children, of Eritrea inspired me to take the time to talk with a few boys I met on the street in downtown Asmara a few weeks later, a conversation that led to my sponsorship of a neighborhood soccer team, documented in E is for Eritrea.

One response to “K is for Keren”