J is for Japan 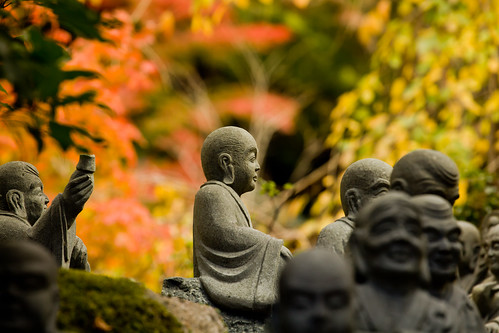 “Daisho in Temple, Miyajima, Japan” (CC BY 2.0) by  Imahinasyon Photography

A plain wooden trunk in the basement of the house of my childhood was off limits. Its contents included my parents’ mementos from the days before we children arrived. The kewpie doll my dad won for my mom at the fair, some dish towels mom had embroidered for her hope chest, comic books that Dad must have picked up to read on long sea voyages when he served in the U.S. Merchant Marines.

It also included items associated with far away places, places I was determined to see. Occasionally, while we kids were in the basement, Mom or Dad would open it and pull things out: a grass skirt from the Philippines; a silk hula skirt with skimpy bra top from Hawaii; a gaudy, child-sized, yellow kimono with bright red, embroidered dragons facing one another at chest height from Japan.

Dad brought these pieces of exotica to Minnesota from ports he visited during and after World War II. The most important ones for me were from Japan: a silk kimono and a fan. The kimono — not the tawdry yellow one — was elegant, purple from the neck and shoulders down with a scene of white cranes flying among the clouds above snow-covered mountain tops from the hem at the bottom up to the knees. The kimono was lined with the softest red silk, softer than any fabric I could remember touching my skin.

The fan’s two wooden handles were a shade of neither red nor brown, but both at the same time. When opened, the semi-circular fan, silk on one side with a stiffer fabric on the other, to help it keep its shape, displayed a mountain in the distance with graceful tree branches with white blossoms in the foreground.

I loved to put on the kimono, even though the two feet with the mountain scene spilled around my feet on the floor. I struggled to open the fan correctly. I didn’t want to tear the delicate, painted paper. I needed both hands and had to remind myself which way to move the handles to separate them and to reveal the fan.

These two items, more than anything else, opened a door to my curiosity that demanded I learn as much as possible about Japan and the people who lived there.

Japan was my first love, long before boys ever began looking interesting.

When I started school, I discovered there were books in its library about Japan. I read them all, starting with the bottom shelf (for those reading at the first-grade level) and then continuing up the graded shelves. By the third grade, I had finished all the books, up through those on the sixth-grade level shelf. I turned to books about other countries, such as nearby China, but they didn’t hold my interest. Learning about Japan had become a dream.

Someone else in my Minnesota hometown also had a dream.  Miss Ingram, our school music teacher, dreamed of igniting passion for music among her students.  Each year she wrote and organized two musical productions, operettas, one for the third and fourth graders and one for the fifth and sixth graders.

In sixth grade, the title of our operetta was “Around the World in 60 Minutes.” Two students led the audience on a tour of countries represented by songs the rest of us sang. One of my pieces was the Gilbert and Sullivan tune “Three Little Girls From School Are We” from The Mikado.

I will never forget wearing the purple silk kimono from the basement trunk in that production.  And my infatuation with Japan got an even bigger boost when Miss Ingram taught the three of us how to open our fans one-handed with the flick of the wrist.  By then, my dream had grown from learning as much as possible about Japan to wanting to visit Japan.

In the following years, my dream of visiting Japan took a back seat to the shorter-term goals of finding and keeping friends, passing tests, getting boys to notice me, and figuring out how I could escape the small town I felt I was stuck in.  Eventually I did make it out of the Midwest, all the way to San Francisco. I enrolled at San Francisco State University and completed their Masters of Arts program in Teaching English as a Second Language (ESL).

In my first course, the instructor demonstrated two approaches to teaching a foreign language. Her sample language was Japanese. And that switched my dream of visiting Japan back on. Now I wanted to live and work there.

But there weren’t many jobs in Japan when I completed my training. Instead, Iran was the place with jobs open to Americans. I signed a two-year contract and headed there with 10 other American ESL teachers.

At the end of my contract, I finally made it to Japan, the final stop in my nearly three-week, multi-country trip home, through India, Thailand, Indonesia, Korea, and finally, four days in Tokyo.  Four days when I smiled so much, my jaw ached by the end of the day. I was in Japan!

I went to a Japanese tea ceremony. I climbed to the top of the Tokyo Tower. I saw a Kabuki theatre production. I went to a nightclub. I wandered through a park with streams, bridges, flowers, and trees aesthetically arranged to bring calmness to those visiting.

I bought my very own blue and white silk kimono, though the prices in Tokyo were so very high I couldn’t afford one to compete with the beauty and elegance of the purple one. Mine was only knee-length and had only geometric designs along the bottom. I bought trinkets to bring home for family members and watched in wonder as the smiling and polite salespeople wrapped them in decorative paper as if the packages were gifts to me.

Those four days in Tokyo realized enough of my dream, but opened up my hopes for seeing more of the world. I also drew two important lessons from the experience, one immediately and one that only came years later.

First, I learned that working steadily to accomplish a goal makes the problems and disappointments, both small and large, shrink to insignificance. I never give up.

Second, years later my parents, my husband, and I were crossing the mall in Washington, DC.  By then, I was working for the U.S. Department of State as a Foreign Service Officer and this was my parents’ first visit.

While we waited at an intersection for the light to change, a middle-aged Japanese man approached my father to ask for directions.  After pointing the way for him, my father joined the three of us. Dad was pensive and finally commented that fifty years earlier, while he was in the Pacific in the Merchant Marines, he would never have imagined that he would one day be speaking to someone from Japan in the capital of our country.

Hearing that comment made me realize how generous and understanding my parents were because they never discouraged me from my dream of going to Japan. My dream began so shortly after the end of World War II, yet neither of my parents tried to dissuade me from my interest in the country of our former enemy.

Instead, they encouraged the spark of interest with the hope that it would lead to other interests and a love for learning. They were right.

The purple, silk kimono was the spark. It ignited my curiosity which led to my nearly thirty-year exploration as a resident, not a tourist, of several foreign countries so small you’ve probably never heard of them.

3 responses to “J is for Japan”