I is for Iran 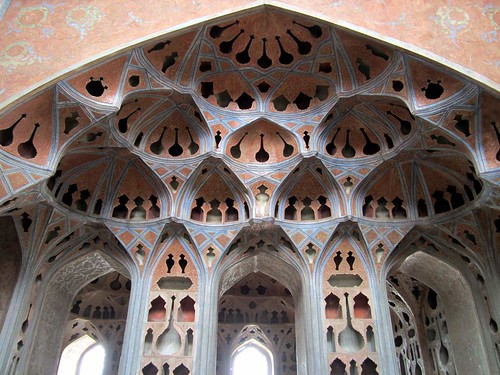 I loved it and I hated it on the same day every day for 882 days. It was Iran, and my love-hate relationship began on April 2, 1975, at the start of what I referred to as the world’s most elaborate April Fool’s gag.

Two years before, I hadn’t thought such an adventure possible. At that time, I lived in Berkeley, California, with my husband and our cat named Kitty. I planned to enroll in graduate school in the winter. Without warning my husband told me he thought we should divorce. It was simple and amicable: we had no property to split, no home to sell, no children. But simple doesn’t mean painless.

For most of the first year in grad school, I had nightmares, dreaming that I either chased my husband or was chased by him. My subconscious wanted to hit him, to hurt him, but I never caught him. And I didn’t want to be hurt any more, though why I thought he was trying to do so remains a mystery of the dream state. I woke up exhausted. Then, for months I had no dreams at all.

Toward the end of year two, he appeared in a dream, a guest at a party. I introduced him to other partygoers, referring to him as a friend. No chase scenes, no anxieties. The difference was so pronounced I wrote him a letter describing the dream. He wrote back, admitting that he hadn’t handled suggesting our separation well, asking for forgiveness, though not reconciliation.

Two weeks later, the University of Southern California offered me a job in Iran. The timing was right. Painful as it was, I knew that if we hadn’t divorced, I wouldn’t be at the beginning of this adventure. A door had to close for me to see the open door next to it.

April 2 began in London where the New York to Tehran Iran Air flight picked up a small number of passengers for the final leg. Passengers originating from New York filled most of the seats. Ten of us from USC—nine teachers and the man who hired us, Bill, the director of USC’s American Language Institute—joined them. We stood out from the rest. We were taller. Our skin, lighter. We were foreigners.

I hope there is space in the overhead compartment for my violin. There had been no problem on the flight from Los Angeles to London, but that plane was much bigger: two seats on each side of the plane with a center section of five seats across. So large, I could imagine I was on a train or a boat, not a plane, as I wandered up and down the aisles.

This plane had three seats on either side of the aisle, the size I was used to for domestic flights from California, my adopted home, to Minnesota, my birthplace. The overhead bins reduced headroom, making the plane feel even smaller. The thought of spending six hours shoulder-to-shoulder, elbow-to-elbow, and knee-to-knee on such a small plane brought on anxiety, especially since my boarding pass was for the middle seat. There was nowhere to escape the crowding, like my 4,000 member hometown church’s pews at a Christmas or Easter service.

“Hey, Roger,” Annie said. “Is this our row? I’ve been counting them.” She pointed to the strange symbol under the overhead bins and held up her boarding pass.

Annie and I had been roommates in San Francisco. She wanted to teach in Spain. But my offer came through first, and she traded being faced with finding a new roommate and simultaneously looking for a job for a guaranteed position just a bit east of her goal.

“Yeah, this is row 22,” Roger said. He had been in the Peace Corps in Ahwaz, Iran, ten years before, the only one of us who had lived in Iran. “They use Hindi numerals in Iran. The 1 and 9 look similar to our numbers. The rest are like chicken scratches. You’ll get used to them.”

Annie squeezed her way to the window seat. I pushed and rearranged the bags and bundles already in the overhead compartment above our seats until my violin case fit and then settled in the center seat. Roger took the aisle seat, to keep us protected from intrusion by prying eyes and hands across the aisle, he said.

Ahead of us, Bob and his wife, Nancy, stood in the aisle next to row 21. Already in that row, I saw a man wearing a heavy winter jacket in the window seat. Boxes tied with twine and fabric bundles filled the area under the seat in front of him as well as under the middle and aisle seats. An additional case rested on each of the two otherwise empty seats, as though they marked them as saved for companions. But Bob and Nancy’s boarding passes bore 21B and 21C.

Bob looked up, noticed a woman in uniform with the Iran Air logo on her hat, and motioned to her. Pointing to the items on seats 21B and 21C, Bob chose his words diplomatically, not wanting a confrontation, simply pointing out the problem, just as any other Midwesterner would do. “These spaces are already full,” he said. “Where can we put our carry-on?”

“You shouldn’t have brought so much with you,” the attendant replied and then broke away to continue moving to the front of the plane. Nancy’s mouth dropped open.

“I have Valium,” offered Annie. She and I had laughed when her doctor handed over a container with thirty 1-mg tablets of the anxiety-reducing medication in response to her request for something to deal with motion sickness. She had expected him to give her two or three tablets of Dramamine. Before we left, Annie counted out fifteen tablets for me and kept fifteen for herself. We never dreamed we would take them all. But by the time I left Iran 822 days later, I had replaced my fifteen tablets many times. No prescription required. Even 10-mg strength.

“Let me help,” said Roger as he got out of his seat and took one of Nancy’s bags. He squeezed it into an overhead bin a few rows behind us. Bob did the same with another bag several rows in front. The man in the window seat picked up the parcels on the middle and aisle seat and placed them on his lap, apparently prepared to hold them for the entire flight.

“You better take the middle seat,” Roger said to Nancy. “You can stuff your purse between you and the guy next to you. It’s a better option than the aisle seat. No one will bother Bob when walking down the aisle.”

Once all passengers were seated, a male flight attendant read the standard safety instructions, first in Farsi and then in English. During the announcement, I watched a second male attendant across the aisle lean back as he lowered both his seat and the seat-back tray, and lit up a cigarette. The final statement of the standard instructions also differed from what we expected: “Let us know if there is anything we can do to make your flight comfortable.”

Ten hours after leaving London, we arrived in Tehran after a stop in Ahwaz to clear customs and immigration. Bill would return to LA once USC sent someone as director of the Iran program. Annie and I were the last two teachers Bill hired, just two weeks before we left. I was single and, at 26, the youngest of the group. I was also the most naïve.

The above is the opening to the draft of my first memoir with the working title Stuck in Stage Two: A Memoir of Cross-Cultural Confrontations and Misunderstandings.

8 responses to “I is for Iran”