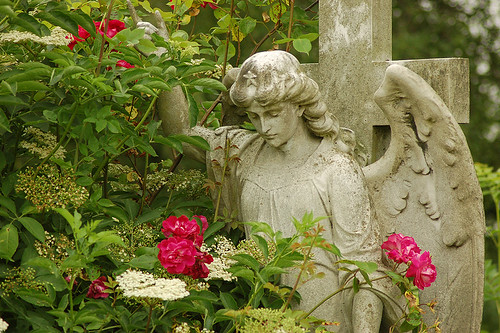 The summer following my first semester at California State University at San Francisco proved to be a real test for my guardian angel. I had no classes in the summer so I set off for Minnesota, to spend the summer with family and relax before returning in the fall. I hoped to find either a summer job to earn money or a volunteer opportunity to get experience working with Spanish-speaking families who moved from Texas to Minnesota each summer to work in the labor-intensive sugar beet fields.

I had very few possessions, nearly all of which fit inside the trunk and on the back and the passenger seats of my VW Beetle. My bicycle fit on a rack in the back, over the engine. I took off on the nearly 2,000-mile drive and ran into a little trouble on my first stop to fill my tank, at the intersection of I-80 and I-505 at Vacaville. Once the gas tank was full, I tried to start the engine. The car didn’t fire up. I had experienced this before and knew what usually worked. I removed the bike from the rack and opened the engine cover.

Once the gas tank was full, I tried to start the engine. The car didn’t fire up. I had experienced this before and knew what usually worked. I removed the bike from the rack and opened the engine cover.

I was about to remove the distributor cap and poke around the points with a screwdriver when a young man wearing a cap with the station’s logo walked towards me. When he got close enough to see what I was doing, instead of offering to help, he said, “Well, it looks like you know what you are doing,” turned around, and headed back to the station.

After poking the points as a friend had shown me in the past, I replaced the distributor cap, closed the engine cover, and then tried starting the car. This time, it fired up as expected. After repositioning the bike rack and wrapping the bike tightly, I took off again.

The drive from San Francisco to my parents’ home took three-and-a-half days. I made it to western North Dakota before I had to play around with the points again. Then, smooth sailing–until I got to the Highway 75 off-ramp from Interstate 94, only two miles from my parents’ home. When I reached the stop sign at the top of the ramp, the car stalled and wouldn’t move one more inch. I engaged the emergency brake, removed the bike, pumped up its tires, and rode three blocks to a gas station on Highway 75 where I arranged to have my car towed to my parents’ home.

AAA paid for the towing. I had $240 in my pocket. I knew I would need $60 for gas and motel rooms to get back for the next semester. The estimate for repairing the engine was $180. I did the math: I needed a job. No volunteering for me. At least I had a no-cost roof over my head while I waited for the car to get fixed.

But this was just my guardian angel’s first job that summer.

One response to “Guardian Angel II”