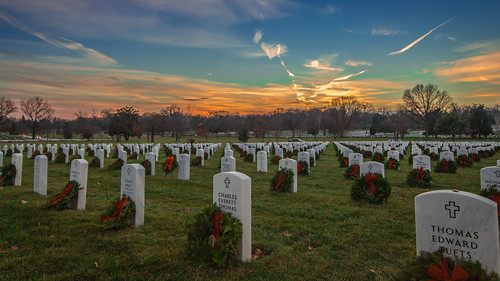 “Wreaths Across America Sunset at Arlingt” (CC BY-NC-ND 2.0) by  joseph.gruber

One of the original 13 colonies, Virginia became my home state when I joined the US Department of State in 1985.

For the first six months of my career as a Foreign Service Officer, I lived in a studio apartment at the top of a hill overlooking the Iwo Jima memorial in Rosslyn, an area of Arlington, Virginia. Arlington is a city, but it is not part of a county, a geopolitical oddity referred to as an independent city. Virginia has 38 such independent cities. There are only three more anywhere else in the United States: Baltimore, Maryland; St. Louis, Missouri; and Carson City, Nevada.

During those six months, I completed State’s orientation course, referred to as A-100 because that was the number of the room where the first such course was taught. I also completed the Foreign Service Institute’s ConGen Rosslyn, a simulation of the work I was expected to do when I arrived in Stuttgart, Germany, and took up my position as vice consul at the Consulate General; and 14 weeks of German to brush up my college German and bring it to the level considered adequate to conduct visa interviews.

But a conversation a year later in Stuttgart made me realize I hadn’t yet accepted Virginia as my home. I met an American woman in the US Army in Stuttgart who told me I looked familiar to her. After we listed all the places we had each lived, without discovering any in common, the daughter of the Consul General mentioned that she thought I had lived in Virginia for awhile. I admitted I had been there for six months in 1985 while I was a student at FSI. The American woman’s eyes lit up at that. She had worked as a security guard at FSI in 1985. I looked familiar to her because I walked past her each day when I entered the building. Two insights hit me then. First, being somewhere for six months is living there. Second, I needed to pay attention to people I walk past each day.

I spent another six months in Rosslyn in 1987, after I completed my first assignment in Stuttgart. During those months, I completed more training at the Foreign Service Institute–area studies, budget and fiscal, personnel, and general services training. All that training was to prepare me for filing the administrative officer position at the US Embassy in Doha, Qatar. I would be the only American responsible for all those roles in Qatar.

Seven years later, in 1994, I finally accepted I was a true Virginia resident when we bought a townhouse in Arlington. I loved living there.

But then again, I loved living everywhere I have lived. There is no better way to live.