W is for Weehawken 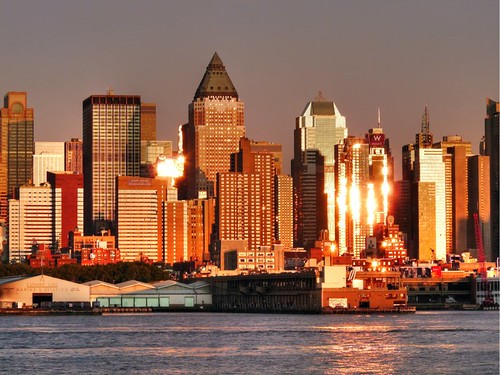 “Sunset on the Hudson waterfront” (CC BY-SA 2.0) by  joiseyshowaa

It was the summer that changed my life–1968. I spent it in New Jersey where I shared a house in Union City with seven other young women, all college students, while we volunteered in an interdenominational arts/crafts/recreation program for elementary school-aged children. The church where I volunteered was in Weehawken, just a few blocks away from the house where we stayed.

Pastor Hank Dierck showed us the place in Weehawken that provided the best views of Manhattan, probably right where the photographer stood when the above photo was taken. It was also where Aaron Burr, the sitting Vice President, shot Alexander Hamilton, former Secretary of the Treasury, in a duel in 1804. Both men had been involved in duels in the past, but by then dueling was illegal in both New York and New Jersey. Hamilton died the next day in Manhattan. Burr was charged with murder in both New Jersey and New York. Burr was either acquitted or the charges were dropped. The rivalry between the two men arose from disputes in a number of elections going back to 1791. Let us be thankful dueling is no longer legal in any of the United States.

About 50 college students, most of us from the midwest, took part in the summer program. The organizers provided us with a week of orientation to the area which included suggested recreation and arts activities for the children. Most of the 50 volunteers were assigned to work in Jersey City churches where the majority of the children were African American. But those of us in Union City and Weehawken had a completely different mix of children. Most of ours were the children of Cuban immigrants.

I was shocked by the amount of litter I saw on the streets in Weehawken, even in the residential areas. So I devised an arts project I hoped would help the children realize they shouldn’t litter. First I made two copies of a list of things I knew they could find on the street that I felt should be tossed into waste baskets or garbage cans. I broke my class of 8- and 9-year-olds into two groups. We went outside, and I gave each group one copy of the list and a large paper bag. I sent one group east from the church and the other south so they wouldn’t be searching for the items in the same places. Once they had found and picked up each of the items on the list and bought them back in the paper bag, we went back inside to talk about how easy it was to find everything.

One boy told me it wasn’t easy. “I had to go all the way to the corner to get the gum wrapper,” he said.

I then asked them to draw a picture of their homes. When they were done, I told them they should glue at least one of the items from the bag to their pictures, in front of their houses. One boy must have figured out what I wanted. He said he didn’t want to mess up his picture, so he drew a waste basket to one side of the picture and glued his piece of litter into it.

Seven weeks after arriving in New Jersey, I flew back to Minnesota with tears in my eyes. Those seven weeks had changed me. When I left Minnesota, I had been looking forward to entering my junior year at Concordia College where I was majoring in German and minoring in Russian. I knew I wanted to travel, even live, overseas, and I thought being able to speak foreign languages would make that possible. But in the summer of 1968 I met a group of people, the parents of the children in my class, who needed to learn English as their second language. And I realized I didn’t need to study another language–I already knew one that was foreign to others: English.

Once back in college, I changed my major to English. I stuck with my Russian minor because I didn’t have time to change that, too. My German courses filled the number of credits I could devote to electives. And I set out to take every English course that wasn’t dedicated to literature. Because I wanted to teach the language–how to understand it, how to speak it, how to read it, and how to write it.

It took me a few years to complete my goal of learning how to teach English as a second or foreign language. Seven years later, in 1975, I was ready for that foreign living experience. I set out then for Iran, the first of 10 foreign countries I would live and work in before I retired.