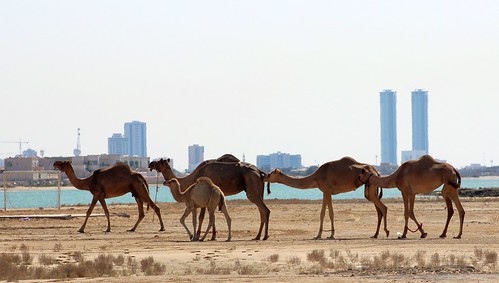 We moved to the United Arab Emirates in 1996. Abu Dhabi was my second Foreign Service assignment in the Middle East, and my third living experience in the region.

When Ramadan came around our first year in Abu Dhabi, I thought I knew what it was all about, having lived more than two years in Iran and then two in Qatar. I already knew that I hadn’t learned much about the month in Iran, however, because not all restaurants closed during the day; they just pulled down the shades so that those fasting wouldn’t have to see those who weren’t. But in Qatar, all restaurants, except those in the big hotels, closed until sundown, which was announced by a canon being shot off along the corniche. Ramadan, therefore, was a dreary place for most of us in Doha. We all looked forward to its end.

The restaurants in Abu Dhabi remained closed during the day during Ramadan, but it didn’t seem like the dismal month I recalled in Doha. The local employees talked about Ramadan with joy. Instead of focusing on all those hours when they couldn’t eat, they celebrated the dishes that were most often served only during Ramadan and being together with family and friends each evening. I began to think of Ramadan more as a month-long Thanksgiving celebration than a burden and inconvenience to have to get through.

Our first Abu Dhabi Ramadan, we were invited to many evening iftar, or breaking of the fast, meals hosted by my contacts at the embassy. This was no different from my experiences in Qatar. But perhaps because the traditions were more familiar I learned more of what I hadn’t known before. One example: the food that was prepared for these large fast-breaking meals was also distributed to those in the city who didn’t have the means to provide such lavish meals for their families. With the wealth of the country being so well-known, it was a surprise for me to learn that not every Emirati was so self-sufficient. But everyone in the country had the opportunity to join in the evening meals of Ramadan.

But the main reason for the shift in my thinking came during our second Ramadan in Abu Dhabi. One afternoon, Huda, the wife of one of the local employees who worked for me, Mackawee, called me at work to tell me not to cook anything that evening because she planned to bring a typical Yemeni Ramadan meal for Alex and me. I was surprised and pleased, especially because I couldn’t think of anything that I had done to deserve such treatment. I appreciated Mackawee, but I don’t think that I treated him with any more respect or regard than my predecessors. But Huda decided to share the joy of the holiday with us. She brought a number of typical Yemeni foods, explained what each was, and then left us to enjoy the meal so that she could spend the evening with her husband.

The following year, our last in Abu Dhabi, I brought up the idea of hosting an iftar at the embassy to a number of the women who worked there. We agreed it would be an excellent way to encourage more of a community feeling among the employees and their families, so we started by making a list of the foods we each thought of as typical Ramadan food.

I was surprised to learn that what was typical on the Arabian peninsula wasn’t necessarily typical in Jordan or Egypt or Lebanon, countries represented by some of the women who organized the meal. So coming up with the menu was not so simple. We agreed that the meal must begin with fruit juice and dates, the items the most devout ate first to regain their strength after which they would pray and return for the rest of the meal. For the meal, we had lamb and rice and stuffed vegetables and salads and many other items I can no longer remember. For dessert, I contributed the other item I always thought of as typical of Ramadan, Oum Ali–an Egyptian dessert, the richest bread pudding in the world.

Most of us had to prepare the food at home and bring it back to the embassy to assemble the table. Just before sundown, the local employees began to return, with their families. As we saw the gathering numbers, we had a moment of panic that we wouldn’t have enough food. But we had more than enough.

As we cleaned up after the meal, I learned that several of the women who had helped with the meal had never before participated in hosting an iftar meal because while they were Arabs from Jordan, Lebanon, or Egypt, they were Christians. The entire event was more of an adventure than I had thought.

As soon as I mentioned it, my secretary Sumayya suggested the local employees should host a similar iftar meal in Yemen.  She brought the idea to the local employee association. They agreed. And within a week, we had plans for a Yemeni-American Iftar-Thanksgiving event on a Thursday (Gulf Saturday) evening. The local staff set up Bedouin-style tents on the grounds of the embassy compound and brought in big pillows to line the interior of the tents for casual lounging while we ate. The Americans brought foods we thought of as typical for Thanksgiving and the Yemenis brought food they typically ate for Ramadan.

No one went away hungry.