B is for Barbados 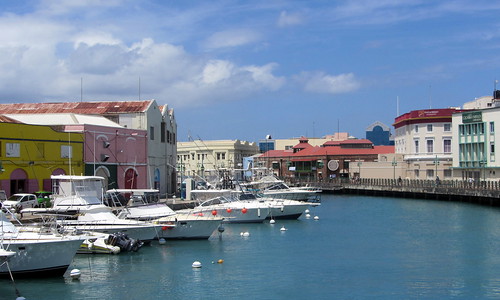 Ever dreamed of living on a tropical paradise island? I did. Both the dreaming and the living.

From December 1989 to June 1991, I lived in Bridgetown, Barbados, where I worked first as one of six consular officers and then as the financial management officer of the US Embassy.

But Barbados wasn’t exactly what I expected. Sure, they speak English there. But a common language doesn’t ensure good communication. Even more important, the fact that English was the common language meant there was a good deal of assuming going on that we all should understand one another, so if we didn’t, it must be somebody’s fault.

It took a physical fight between a local employee, Kay, and the wife of one of the Americans to learn why we miscommunicated so often. Let’s look at three factors–Barbados’ British history, their language, and being in paradise.

Factor #1: It’s a former British colony, so they are just like us, right?

Wrong. Let me count the ways.

First, they drive on the left side of the road. And they stop to have a conversation in the middle of the road if they encounter someone they know coming in a car from the opposite direction. That stops traffic in both directions. Seemed impolite to outsiders, but not stopping would have been impolite to Bajans (the term people from Barbados use when referring to themselves).

In Barbados, one gets directly to the point with people one doesn’t know, but one beats around the bush with those one knows well.  (I was supposed to understand my slip was showing when someone told me it was “snowing down south.”) So we were always behaving too familiarly with people when we first met them by speaking indirectly and then shutting them down once we got to know them by speaking with them directly. What was polite to us was rude to Bajans and vice versa.

Third, there’s the difference between respecting privacy versus being polite. When the consular section moved into a new building where all office spaces were cubicles, we Americans observed the privacy that the cubicle walls implied by walking past the private spaces contained within them. The Bajans on the other hand invaded our privacy by barging into our cubicles to say Good morning–even if we were holding a meeting or were on the phone at the time. Once again, polite behavior in one culture was rude in the other.

Factor #2: They speak English there. But I rarely understood them.

When answering the phone in the afternoon, Bajans say, “Hello. Good night.” I felt the caller was about to hang up on me, not engage in conversation.

My first day on the job, my new boss asked me to read a telegram reporting on the arrest of an American, written by one of the local employees. My boss could hardly hide her amusement as I read the American was arrested for uttering. Uttering what? An obscenity, a threat, a promise? Uttering, it seems, is the verb for passing counterfeit currency.

In addition to using a transitive verb as an intransitive verb, Bajans use nouns as verbs, as in, “Where did you get that bike? Did you thief (pronounced tief) it?” Or “What did you do last weekend?  Just lime around?”

And then there are the words that mean something slightly different, like wife. I answered the phone for a single colleague one day. The woman on the other end told me to leave a message that his wife had called. Wife just means a woman with a relationship to a man. Then there is the word deputy or the phrase outside woman both of which mean a woman in a relationship to a man who already has a wife.

In addition, Bajans seemed to group people into one of two groups–people they know and tourists. Bajans are very friends with both groups. But there are those they don’t know who aren’t tourists, like we were. Anyone in that category gets ignored. A greeter in a grocery store walked up to me with a big smile and asked me how long I had been in Barbados. When I told her I lived there, she turned and walked away. She probably thought that was the polite thing to do–not to bother someone who didn’t need her help.

So there I was, with my husband and son, living on a tropical island, where everyone spoke a familiar language that led me to misunderstand about half of what I heard, and where the social conventions made me insult the people I considered my friends by treating them, they thought, as though I didn’t know them at all.

And I loved every minute of it–well, once I finally caught on to what was happening.

That fight between Kay and the American woman? It happened when the American woman put her cigarette out in an ashtray she then placed on Kay’s desk as she reached for Kay’s phone to place a phone call–all without asking Kay’s permission. The American woman was from New York, a place where people have a reputation for being direct with strangers.

It as ironic that the incident led to conversations within the embassy about our different cultural perspectives. I wouldn’t claim the air was cleared throughout, but the conversations did lead to some of us gaining understanding that then led to enjoying the differences instead of being baffled by them, something I believe I would never have come to understand without the prompt of the fight.

5 responses to “B is for Barbados”