A is for Antananarivo 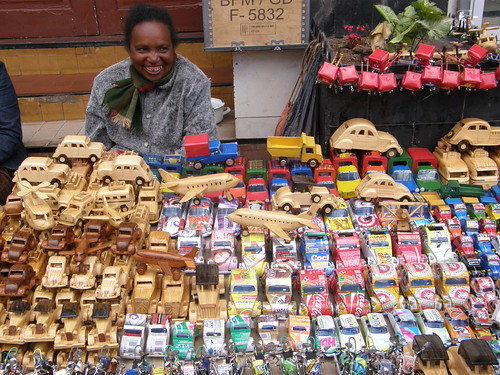 “Cochecitos” (CC BY-NC-ND 2.0) by  copepodo
Check out the toy cars made from soft drink cans.

From September 2003 until January 2004, I lived in Antananarivo, the capital of Madagascar. Known as Tananariv during a period of French colonization, it got shortened even further to Tana, especially by foreigners who have trouble getting the multiple-syllable names out with accents in the right places.

I had always considered Madagascar, the fourth largest island in the world, to be part of Africa, but the Malagasy people don’t agree. On a map, the gap between Madagascar and Mozambique on the east coast of Africa gives the impression that Madagascar split off from Africa. But there is more evidence, hidden from view, that Africa first split off from Gondwana, the supercontinent, at which time Madagascar’s west coast was formed. We’re talking millions of years ago, nearly 200 million years ago. Then a mere 88 million years ago, Madagascar split off from what since became the Indian sub-continent. It then drifted west. The minerals and precious gems found underground are similar to what can be found in India.

Its people also do not seem African. And they aren’t. The original people who settled Madagascar came from islands in the South Pacific. The people look more like Indonesians than Africans. They are short in stature and lighter in skin tone. They dress more like the people of Indonesia. The women wear sarongs and shawls around their shoulders. And their original animist religious traditions are more like those of Indonesia. They revere their ancestors and periodically remove the bones from their tombs in a ceremony referred to as turning the bones. Once the bones are removed, the family gathers to celebrate after which the bones are rewrapped in silk, sprayed with perfumes, and then returned to the tombs.

Madagascar is also home to unique plants and animals, the most famous of which is the lemur. More than 100 species of lemurs exist, all of them endemic to Madagascar. They range from the size of a mouse to a rhesus monkey. The largest, the indri, has a very distinct call which some people compare to a baby crying. Listen and decide for yourself.

By the way, the movie Madagascar got it right: the natural enemy of the lemur is the cat-like fossa.

For more information about Madagascar and Antananarivo, check out the following:

Enjoy some music from Tarika, a Malagasy group focusing on traditional Malagasy music and its roots in Indonesia:

3 responses to “A is for Antananarivo”