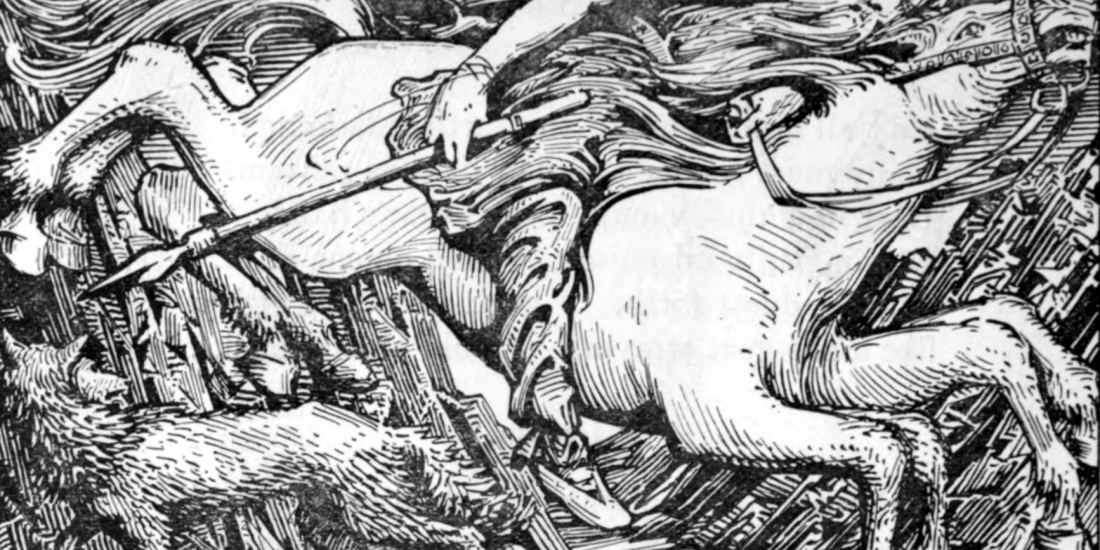 Sleipnir (pronounced “SLAYP-neer”; Old Norse Sleipnir, “The Sliding One”) is the eight-legged horse of the god Odin. Sleipnir is one of Odin’s many shamanic helping spirits, ranks that also include the valkyries and Hugin and Munin, and he can probably be classified as a fylgja. Odin rides Sleipnir on his frequent journeys throughout the Nine Worlds, which are held in the branches and roots of the world-tree Yggdrasil. 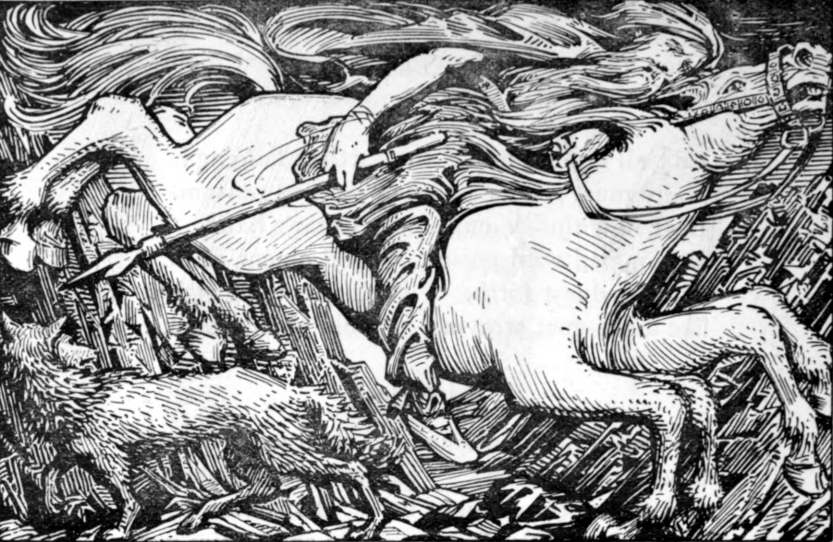 My granddaughter is fascinated with My Little Pony right now. Some of the inhabitants of Hasbro’s magical land of Equestria are just that–ponies. Some have wings. Some are unicorns. And some both are unicorns and have wings.

Whatever color or version–with a horn or without, with wings or without–My Little Ponies are magic.

Just like Sleipnir. Even without having a unicorn’s horn or wings, he can fly. And he has eight legs.

Though my A to Z challenge is to write about Norse mythology, the fact that references to Sleipnir mention that eight-legged horses can be found in other mythological traditions as well, usually associated with shamanism in some way, has veered my thinking in a different direction. So for today I decided to go in search of information about other eight-legged, mythical horses. After all, I’ve already talked about Sleipnir in L is for Loki and O is for Oðinn, so you already know how Loki shape-shifted into the form of a mare to attract the giant builder’s stallion away from the task of completing the wall around Asgard and that Odin rides on Sleipnir during his wandering through the cosmos.

I found several tales of horses with miraculous powers, most often the ability to fly or at least to cover great distances in a short period of time. But I didn’t find many examples of eight-legged horses–with or without magical powers.

The most promising possibility comes from South Korea where there is a tomb, Cheonmachong, from the 5th to 6th century CE, referred to as the Heavenly Horse tomb, with a stylized painting of an eight-legged, winged horse on a birchbark saddle flap inside the tomb. I searched for a myth to go with this, but failed to find one. I probably need more time.

I found references to a tale about an eight-legged horse from the area near Lake Baikal, but I couldn’t find the tale itself. This is as much as I found:

Eliade recounts a Buryat legend about a shamanic steed with eight legs: “a young woman takes as her second husband the ancestral spirit of a shaman, and after this mystical marriage one of the mares in her stud gives birth to a foal with eight legs. The earthly husband cuts off four of them. The woman cries: ‘alas! it was my little horse on which I used to ride like a shaman!’ and vanishes, flying through the air, to settle in another village.”

Tales about horses in Mongol culture are fascinating because in many of them, the horses, not the humans, are the heroes, and divinity is believed to be held by the horse, not humans.[1] But I couldn’t find one where the horse had more than the normal four legs.

I found a reference to Bagri Maro from Hindu folklore, which at least one anthropologist suggested is a horse with not only eight legs but also four heads. Another researcher suggests Bagri Maro refers not to a horse but to four people carrying a coffin since the only mention of Bagri Maro in English is from a funeral dirge.

I think I’ll ask my granddaughter what she thinks about a My Little Pony with eight legs. She accepts so many other wondrous elements in her corral of ponies. Maybe she’ll think having one with eight legs would be just fine. Just so long as it has cutie marks.

Image credit: By W.G. Collingwood (1854 – 1932) – The Elder or Poetic Edda; commonly known as Sæmund’s Edda. Edited and translated with introduction and notes by Olive Bray. Illustrated by W.G. Collingwood (1908) Page 238. Digitized by the Internet Archive and available from https://archive.org/details/elderorpoeticedd01brayuoft This image was made from the JPEG 2000 image of the relevant page via image processing (crop, rotate, color-levels, mode) with the GIMP by User:Haukurth. The image processing is probably not eligible for copyright but in case it is User:Haukurth releases his modified version into the public domain., Public Domain, Link