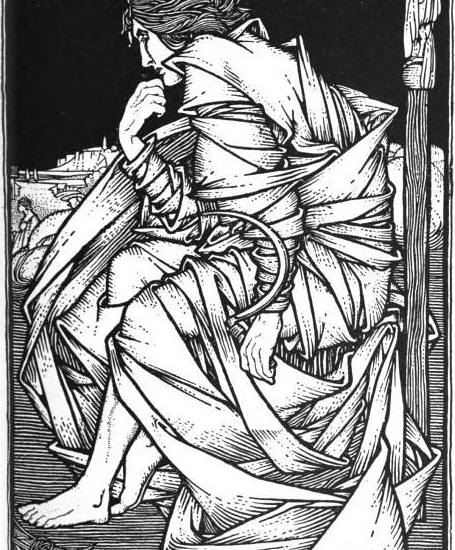 Freyr (pronounced “FREY-ur;” Old Norse Freyr, “Lord;” sometimes anglicized as “Frey”) is a god who belongs to the Vanir tribe of deities. He’s also an honorary member of the other tribe of Norse gods, the Aesir, having arrived in their fortress, Asgard, as a hostage at the closing of the Aesir-Vanir War. 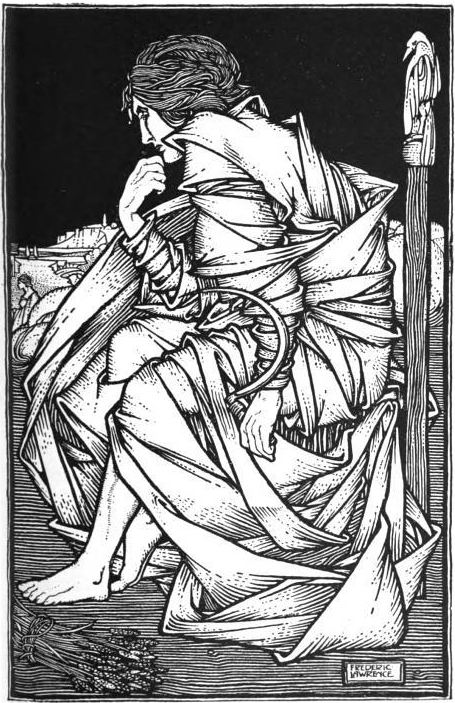 When Loki returned from Svartálfaheimr, the home of the Black Elves, with the six gifts made by the elves, he gave Skidbladnir (the ship made of thin blades of wood which always has a favorable wind and can be folded up and put into one’s pocket) and Gullinbursti (the living boar with golden hair) to Freyr, one of the Vanir, not one of the Aesir. Loki’s inclusion of Freyr among his choice of recipients for his six magnificent gifts indicates how fully Freyr was integrated into the residents of Asgard.

Associated with fertility, health, and abundance, Freyr, also known as Frey, was a most-loved god who received frequent sacrifices at special occasions. Because two sacrifices each year during pre-Christian times went to Freyr–the autumn sacrifice in October and the midwinter, or yule, sacrifice in January–it is understandable that some of those pre-Christian traditions have carried into modern times. The term yule now refers to Christmas, but before the introduction of Christianity, yule was the name for the thirteen-day period beginning with the winter solstice that ended with the midwinter sacrifice. Some consider the tradition of serving ham for the Christmas meal goes back to the tradition of sacrificing Freyr’s favorite animal, the boar, during the yule sacrifice.

In spite of Freyr’s importance in the Norse pantheon and his presence in a number of tales, only one story exists that features him: the story of how he discovered and fell in love at first sight with his wife, the giantess Gerðr or Gerd. And even that one has him in the background, urging his servant Skirnir forward to convince Gerd to marry him.

For us, the word giant conjures up someone who is larger than usual. But the Old Norse word, jotun, conjures up more than great size. The word is closer in meaning to devourer, an indication of how fearful the giants were. But apparently some of them were fair of face and full of grace. At least in Freyr’s eyes.

The story begins with Freyr seated on Odin’s throne, Hlithskjolf. From that vantage point, a seat he really didn’t have any right to take, he can see everything on all nine levels of the cosmology. Seated there, Freyr spies Gerd, the beautiful daughter of the mountain giant, Gymir, in Jotunheim, the land of the giants. Freyr knew the elves, Aesir, and Vanir would oppose a marriage between him and a giant. He’s starting off with two strikes against him.

He also knew it would be difficult for Skirnir or anyone else to approach Gymir’s home in Jotunheim, so he offered Skirnir his horse, which can go through walls of fire, and his sword, which can fight giants on its own.

When Skirnir reaches the gate on the fence that surrounds Gymir’s home, he finds it guarded by vicious dogs. He moves on until he finds a herdsman seated near the fence who asks Skirnir if he is already dead or just on his way to dying, a sign of how treacherous it is to approach Gymir’s home. Gerd hears the noise outside the gate and bids her servant to allow Skirnir to enter.

At first, Skirnir offers Gerd golden apples, probably Idun‘s apples, a gift to ensure Gerd’s youth, if she will come with him to Freyr. When Gerd doesn’t agree, Skirnir offers her Draupner, the ring that drips eight rings just like it every nine days. Gerd refuses both gifts.

Where did Skirnir get Draupner since Odin placed it on Baldur’s pyre? Another of Odin’s sons, Hermóðr (Hermod), retrieved it when he rode Odin’s horse, Sleipner, to beg the goddess of death, Hel, to return Baldur to the land of the living.

Skirnir then turns to threats. First he threatens Gerd that he will cut off her head. Gerd responds that her father Gymir will retaliate. Skirnir then threatens her with being struck by a magic wand which would turn all men away from her so that she will live a lonely and loveless life.

When Gerd still does not agree, Skirnir turns to magic chants to make Gerd a spectacle to all, to remove joy from her life, to doom her to a marriage with a three-headed giant with whom she would live at the roots of the world. He also carves runes on her body which he says he can remove, if he wants to.

Gerd finally relents and agrees to marry Freyr, though she exacts some level of revenge by insisting that Freyr wait for nine days before meeting her in Barri, a leafy grove.

I had hoped our Norway trip would take us to Jotunheimen National Park, but our route is to the north of Norway’s Land of Giants. Maybe next time.