Each month, The Sun magazine offers fiction, poetry, essays, interviews, and photos in a black-and-white format without advertising. Each issue includes provocative ideas from people of science, religion, philosophy, the arts, or a combination. Each issue also includes Readers Write, a feature compiling nonfiction submissions from the magazine’s readers on an intentionally broad topic. Occasionally I submit pieces for consideration. More often, I write essays on the topics too late to submit them.

This piece should have been submitted by March 1, 2015, for consideration for the September 2015 issue.

Is ignorance bliss? Or does a positive attitude beget positive results?

I married for the first time at 20 years old. Too young. And to the wrong man.

But the first few months felt like success. I’m still trying to figure out if it was because he and I were actually on the same page working towards the same goals or if I just didn’t know enough to recognize failure when it stared me in the face.

We were both still students, though set to graduate with our bachelor’s degrees within five months. We each had part-time jobs. His salary paid the rent. My salary paid for groceries. That’s all the expenses we had, and we had them all covered. At least for the six months our student loans were deferred and the four months of grace on our car loan. We didn’t have a plan for what we would do then. We just thought we’d figure it out when we needed to. 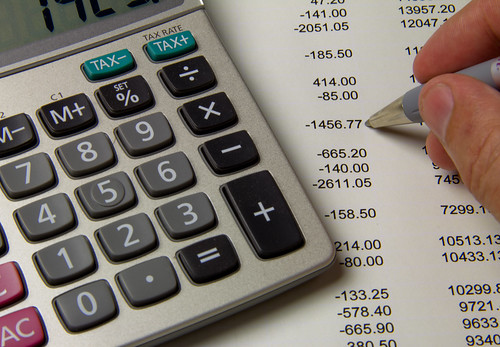 “Balancing The Account By Hand” (CC BY-SA 2.0) by  kenteegardin

My part-time job was very part time. I worked 16 hours a week at 70 cents an hour. After withholding, my take-home pay each week was $7.67 cents. So long as I had three pennies to round the amount up to $7.70, I could cash the check at the Black Hawk bar next door to the movie theatre where I was an usher. The bar wouldn’t hand out pennies, and I didn’t want to settle for $7.65. Because that was all I had to buy groceries and all the other non-grocery items, such as toilet paper and shampoo, each week.

We got our checks every Friday evening. Saturday mornings, I headed for the warehouse grocery store in town with my detailed list of necessities. In order to stretch the money, I picked up canned and packaged goods first. Each shopper was handed a grease pen on arrival with instructions to write the prices on the items as we picked them up. I am amazed now at the trust the store placed in all its customers. But it never occurred to me to write anything other than the listed price. The act of writing also helped me total up the prices as I walked up and down the aisles.

Once I had the cans, boxes, and paper products I needed, I calculated how much money I had available for meat. Ground beef was about 49 cents a pound in those days, chicken was even cheaper, but only sold as a whole bird, and a package of hotdogs was also 49 cents. So for every dollar I didn’t need for canned goods, I could buy two pounds of beef, two packages of hot dogs, or a chicken. That determined the proportion of meat to rice or noodles in the meals I could prepare for the upcoming week.

It never occurred to me to complain that I had so little money. I had what I had. And that had to be enough. So it was.