Y is for Yemen 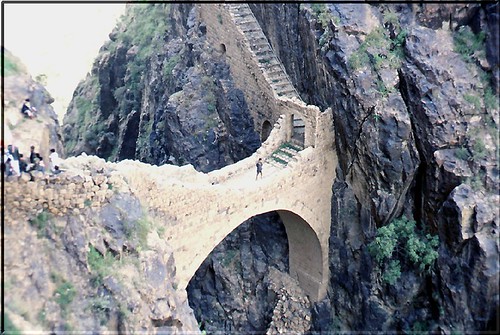 There is only one rule when driving in Yemen–basic rule #1–whoever is in front has the right-of-way. Rear-view and side-view mirrors are optional. Most Western men just can’t give up the driving habits of home, choosing instead to be driven crazy by the behavior of every Yemeni driver.

I, on the other hand, adjusted my driving habits, abandoning the need for my car to march within the lane markings. I rejoiced over the resulting un-choreographed dance other drivers and I performed on the streets of Sana’a. I have always preferred dancing over marching.

I drove every day during my year at the US embassy in Sana’a. All American staff except the ambassador lived a 20- to 45-minute drive from work.

Those who chose the direct route could usually make the trip in 20 minutes. But I enjoyed extending my trips by taking very seriously the suggestions from the Bureau of Diplomatic Security. I varied both my departure time and my route.

I made a game of it. No one could predict my route to work because I didn’t decide which way to go until I turned out of my driveway in the morning.

Here were the rules of my game. At each intersection,

My two-door, Toyota RAV-4 had the tightest turning radius of any car I have ever driven. I never worried about getting stuck when my game took me down a sand and rock track at the end of a paved road. If continuing straight ahead didn’t look feasible, I turned around and headed back.

The RAV-4 was so small I could even take it down streets in the Old City, streets so narrow traffic could only go one way at a time. Of course, cars were not expected on them so no signs indicating the preferred direction could be found.

Late afternoon one day in Ramadan, when everyone in the Old City marketplace was doing last-minute shopping before sunset marked the time for breaking the day-long fast, I ended up on such a road, facing another car. A Yemeni man gently pressed in the side view mirrors of my car to narrow its silhouette slightly and then directed both me and the other driver to move inch by inch, sometimes backing up, sometimes moving forward, until we passed one another with only millimeters separating us. His directing task complete, the Yemeni man turned away from me and continued down the street on foot.

One morning I noticed a black car behind me. I was half way to the office, still following my rules, when I realized the car behind me had made each turn after me. I picked up my radio and called into the embassy to report that I thought someone was following me. After a delay of about a minute, the Defense Attache came on the radio to assure me that the car was from the Yemeni Interior Ministry and was there for my protection.

Apparently the Ministry of Interior had been following each of us to work for months, but that was the only time I noticed. I never decided whether that was reassuring.

Since I never left the embassy for home at the same time any two days in a row, I was already unpredictable. I chose one of three routes home and usually stayed on that path until I got home.

But one evening I was distracted–I had to attend a representational event later but didn’t want to. As I made my way into a traffic circle, a truck on my left brushed up against my car. I pulled over and parked right away, but the truck driver kept going. I must have been quite a sight as I got out of my car and ran down the street in my stylish, but oh so short, dress and high heels yelling at the driver and slapping the side of his trust to get him to stop. I considered him to have been driving recklessly and wanted to be sure there was a report of the accident.

Once he stopped, I called the embassy’s roving security patrol on the radio. They called the police. Within a few minutes both the embassy guards and the two policemen arrived.

One response to “Y is for Yemen”