S is for San Francisco 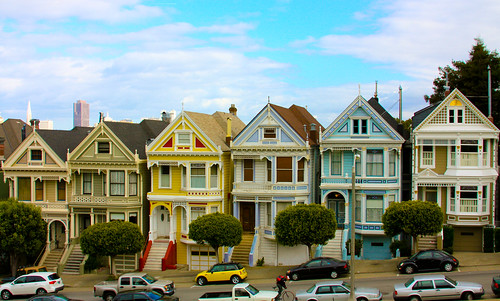 From January 1973 through March 1975, I lived in San Francisco while studying at San Francisco State University. Before I enrolled, a package from the registrar’s office arrived with a list of what I needed to bring with me on the day of registration. One requirement: the result of a chest X-ray not more than 6 months old. Since I hadn’t had a chest X-ray in several years and I received the letter in Minnesota, I had to schedule one before I returned to California.

I made an appointment at the Fargo Clinic where I had been a patient as a child. When they finally called my name, the nurse told me I needed a doctor’s order to get a chest X-ray. I showed them the letter from the SFSU registrar that said I would not be allowed to register unless I had the report on a recent chest X-ray. I didn’t have enough time to schedule a doctor’s visit. They relented and for about $80 (a near fortune at the time), I got my X-ray.

But when I arrived to register, I saw a sign that directed those who didn’t have chest X-ray results to join the line to the left. Those with results were directed to the line at the right. What was the first stop for the line on the left? A free chest X-ray. So much for not being allowed to register without one.

The letter from the registrar also spelled out the order of priority for registering for classes, depending on one’s major, minor, and years remaining to complete a degree. Seniors, for example, had priority for classes in their major because they were in their final year and this was the last opportunity to complete all their required classes. For graduate students, the course of study was the most important. From 8 a.m. to noon, for example, I had priority to register for English classes. After noon, I could try to line up classes in other disciplines.

So I headed to the line for graduate level English classes.

Once I had signed up for a number of English courses, I headed for the Psychology Department. There I discovered the rules were quite different. The doors to the registration hall were closed, with a teaching assistant blocking the way to prevent everyone from entering.  Every half hour, someone came out and taped sheets of paper with two or three letters on them to the outside wall. Those whose last names began with one of those letters would then be allowed into the registration hall. It didn’t matter what the person’s major was, or how close he or she was to completing a degree.

I needed a psychology class to meet the requirements of the masters program. I didn’t need a specific psychology class, just one would do. But by the time the W went up on the wall outside the registration hall, none of the courses that would meet the requirement were available. With a last name that began with W, I was used to being among the last called on, but that wasn’t an excuse this time. The letters were being drawn from a hat to ensure their order was entirely random. But that random order had absolutely nothing to do with the instructions in my letter from the registrar.

A few years later, when I was teaching at Southern Illinois University, a cartoon in the local paper showed two boys walking across the campus where a sign on the lawn said “Wipe out illiteracy.” One boy asks the other what the sign says. The other responds, “I think it says ‘Keep off the grass.’”

My first thought on seeing that cartoon was of my registration experience in San Francisco where what was written wasn’t followed. Little wonder that students didn’t bother reading, if they could.

One response to “S is for San Francisco”