R is for Romania 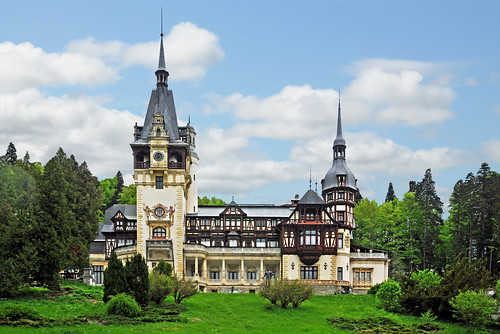 I learned I had been selected for a Fulbright grant to teach English in Romania just weeks before I expected to leave Iran in July of 1977. And I was astonished that a friend was able to find a Teach-Yourself-Romanian book in Tehran so I could get a head start on the language.

It was difficult to figure out just how to pronounce Romanian words and phrases, having no audio sources. Some of the phrases didn’t look too difficult. For example, bună ziua, good afternoon, had only four syllables and more vowels than consonants. I figured it should sound something like “BOON-a ZI-wa.” Likewise bună seara, good evening, looked manageable as BOON-a se-YAR-a. But the Romanian equivalent of good morning had a lot more syllables and nearly as high a vowel to consonant ratio: bună dimineaţa. I understood that little tail under the “t” was pronounced as two English sounds: ts. Thus good morning in Romanian was BOON-a dee-meen-ee-YATS-ah, a mouthful for a non-morning person like myself.

But when I got to the pronouns, I just wasn’t sure I could believe the book. I thought it might be a version of Romanian spoken by those of several generations ago. Who ever heard of a personal pronoun having more syllables than the noun it represented?

English pronouns are all short: I, you, he, she, it, we, they. Not a multisyllabic one among them. But the Teach-Yourself-Romanian book said the Romanian equivalent of the plural (and “formal” or polite form) of you was Dumneavoastră. That is six syllables! And the single, informal form of you wasn’t much shorter, Dumneata, four syllables. I just couldn’t believe that Romanians waste that much effort and time on the personal pronoun, you.

On the plane from Frankfurt to Bucharest, I met someone who had at least heard Romanian spoken by those living in Bucharest at that time. I decided to test out my theory by asking her to tell me how to say good morning, good evening, and good afternoon as a benchmark of my interpretation of the sounds. She confirmed that I had figured out how to say those phrases fine.

Then I asked her about the pronouns, starting with the ones I wasn’t amazed at: I is eu (which sounds a lot like the Spanish equivalent, yo), we is noi, he is el, she is ea, all of them short. So I fully expected my semi-native informant to give me short versions of the singular and plural you. But she didn’t. She confirmed what the book said, Dumneavoastră was the polite form of you. But the familiar, singular form was often shortened to ta, although Romanian has many cases so the spelling varies, depending on whether it is the subject or object in a sentence.

So I learned to roll Dumneavoastră off my tongue when addressing strangers. After all, there was no point becoming too familiar too quickly.

3 responses to “R is for Romania”