N is for North Dakota 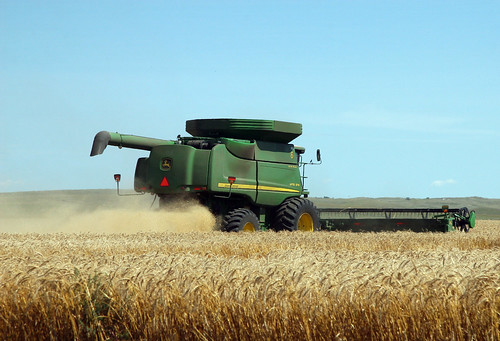 One of my favorite posters during my college days was a white background with a single black line drawn across it from left to right. It wasn’t a straight line, but almost. It ran parallel to the bottom of the poster for about two thirds of the way and then bumped upwards and back down again, returning to parallel the bottom again. Something like this:

Across the bottom were the words “Ski North Dakota.”

For so many years, North Dakota seemed to be the butt of jokes.

But that’s changing. Slowly but surely people are beginning to hear of another side of North Dakota.

There’s the Bakken Formation, the geological structure holding oil and gas deposits that offer the promise of wealth and work. The deposits have been known for decades, but getting the oil and gas out hasn’t been technically and financially feasible until recently. And considering the controversy around hydraulic fracking, I had better stop saying anything more since some will claim the risks of fracking outweigh the benefits which calls the feasibility conclusion into question.

But the Bakken Formation put North Dakota onto the map of some, including television producers who decided to set a prime-time soap opera theoretically set there last season, Blood and Oil.

And that wasn’t the only North Dakota TV series last winter. Fargo, the TV series, ran its second season at the same time.

North Dakota is also making headlines in other entertainment areas as well–the North Dakota State University Bison football team is the only college football program ever to win five consecutive NCAA national championships. I know this not because I follow football; I know this because I am on Facebook and my friends and family from back in North Dakota and Minnesota make sure I know how well the Bison are doing.

Am I trying to get you to consider North Dakota for your next vacation? Probably not. I just looked over the list of 73 things to do in North Dakota with free admission on the North Dakota Tourism website, and I can’t say that any of them screamed “Come here right now. You can’t miss this one.”

So what I guess I am trying to convince you is that next time you hear a joke where North Dakota comes off looking pitiful, stand up and say “Now wait a minute. Don’t you know . . .” and then follow up with one of these little known facts about North Dakota:

Does that sound like a place to make fun of? Really?