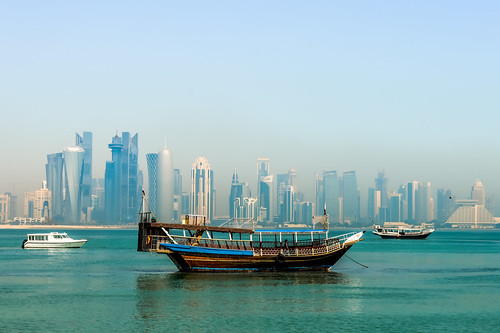 When I got off the plane late one October evening in 1987 in Doha, my first thought was Who left the oven door open? The heat assaulted me at the top of the stairs set up on the tarmac to facilitate passengers getting off the plane. I had never felt such heat.

Doha seemed like a sleepy little town when I lived there from 1987 to 1989. I could barely find any information about it before I left. So instead, I read all about Saudi Arabia, including a cultural guide put together by members of the US embassy staff in Riyadh to help those assigned to the Kingdom prepare for life in an almost entirely gender-segregated society. Armed with that mis-information, I brought videos of every movie I ever wanted to watch, every book I ever thought I’d read, and every board game I could get my hands on. I expected to spend most of my two-year assignment there indoors, more specifically, in my own home.

But Doha was a surprise in so many ways. Those videos, books, and games I brought? Most of them stayed in the boxes. Of all the overseas assignments I had, none offered more to do than Doha.

My first weekend in Doha coincided with the first visit by a cabinet-level official, the Secretary of Energy, to the country of Qatar. I spent the two days before the visit traveling around the city to see all the places the Secretary would be during his very short stay. The evenings were spent in the homes of other staff members at the embassy, entertaining the White House advance team members so they didn’t have to stay cooped up in their hotel rooms.

That week turned out not to be exceptional. Every evening there were dinners, receptions, or other events I was invited to attend. Many evenings, there were both dinners and receptions or receptions and cultural performances. If I managed to spend an evening at home, it was usually in the company of 20-30 other people, support staff sent on temporary duty from Washington or expatriates from the US or Europe whose employers were important contacts for the embassy.

Doha will always have a special place in my heart. I met my husband there, one of the British expats in Qatar. The country of Qatar relied on expats from all over the world–still does. When I lived there, the population of the country was around 300,000, only one third of which were native Qataris. Two thirds came from somewhere else–India, Pakistan, the Philippines, other Arabic-speaking countries, Europe, and North America.

Doha has a special place in the hearts of most European and American expats who lived there. Evermore after, when I run into someone I learn once lived in Doha, I see wistfulness in the eyes as we begin to share stories of how much we enjoyed living in that tiny little city in a very small country. As a small town Midwestern girl, I felt entirely at home in Doha, once I got used to the heat.