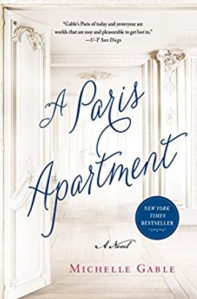 A mystery inside a mystery. April Vogt,

Continental furniture specialist with Sotheby’s, gets the opportunity of a lifetime when the Paris office requests her assistance to assess the contents of a Paris apartment that had been closed for 70 years. Full of incredible furniture finds, as well as an unknown painting by Giovanni Boldini, the contents promise an exceptional auction. Then April finds journal entries of the woman who walked away from the apartment 70 years ago, Marthe de Florian, a 19th-century courtesan whose life intersected with many of the turn of the 19th-to-20th century Parisian personalities and her estimates of the potential auction proceeds skyrockets. But she can’t convince those in charge to follow her suggestions.

In addition, April is uncertain of the state of her marriage and is attracted to the lawyer for the apartment’s beneficiary who plays a key role in getting access to all the journal entries as well as to the woman who wants to sell the contents.

Gable’s story is full of all the key plot twists and turns authors are instructed to include, on two levels: April’s life as it plays out in the novel as well as Marthe de Florian’s in the journal entries. Maddeningly for April, the journal pages provide an incomplete picture of Marthe, leaving her convinced she needs to learn more in order to persuade her bosses to set up a special auction of all the pieces instead of breaking up the collection to add individual pieces to several general auctions. Or does she simply want to satisfy her own curiosity?

Gable’s story is intriguing, all the more so because its premise is real. The real life Marthe de Florian walked away from her Paris apartment at the beginning of World War II where the furniture and the Boldini portrait remained out of sight for 70 years. Love letters to Marthe were also found in the apartment. Gable invents a few characters, a relationship or two, but remained true to the bones of history.

While I enjoyed the characters, some of the relationship contortions that Gable has April put herself through diminished the entertainment, the reason I assigned only four stars.

At the end of the 19th century, plucky, Irish-American Kathryn Ardleigh, orphaned as a child and raised in New York by an aunt and uncle on her mother’s side of the family, is without employment due to the recent death of her employer. Satisfied that she will be able to support herself minimally as an author of penny-dreadful novels, she receives a surprising offer from an unknown aunt on her father’s side of the family to come to England to work as the aunt’s secretary. Kathryn agrees, thinking that even if the employment doesn’t work out, she will gain knowledge of value for the protagonist of her novels. Once in England, she discovers she has two aunts she knew nothing of and they are keeping secrets she must solve in order to succeed in her new home.

This Victorian cosy features a modern and independent female protagonist who find herself thrown mid-stream into upper crust British society where servants and masters coexist, but not often graciously. Befriended on the train from London to Dedham, near the home her aunt has invited her to live and work, by Eleanor Marden, a lady of leisure somewhat younger, her brother Bradford, and Bradford’s friend, Sir Charles Sheridan. Sir Charles is Kathryn’s foil, a modern scientist, enthusiastic that photography, fingerprints, and detailed examination of evidence when solving crimes. Yet he can’t make up his mind if Kathryn’s modern ideas are rational or acceptable.

The pace of the plot in this story could have been faster since the title crime doesn’t occur until the last third of the book. Since this was intended to be the first in a serious of Victorian mysteries featuring Miss Ardleigh, the authors seem to feel the first two thirds of this book were necessary to set up the series, not just this first novel.