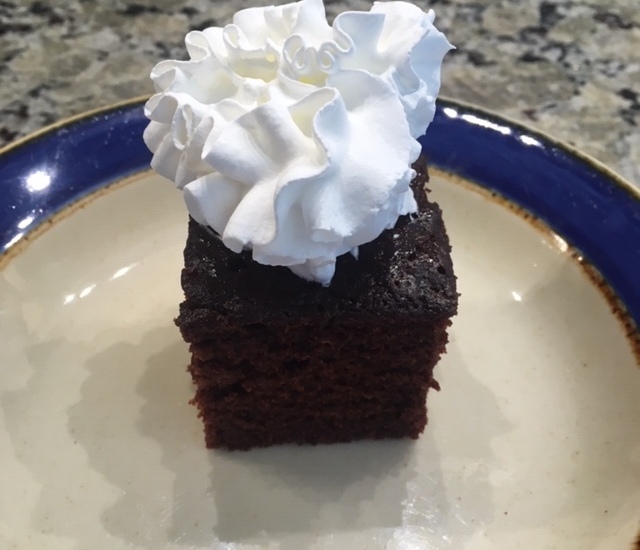 My dad’s sister made crazy cake for me when I was about the same age James is now. I asked her for the recipe once, but she didn’t remember the cake or making it for me. Yet it’s one of my clearest childhood memories.

I remembered that the cake was chocolate and that preparing the batter involved making three holes in the dry ingredients and pouring in three different liquids, one into each of the holes. I was delighted when I found the recipe for wacky cake in a cookbook prepared in the 1950s by the ladies of First Lutheran Church of Fargo, ND. Friends we met here who went to high school in Fargo found the cookbook among items from their parents and shared the book with me because they knew it contained recipes for some Norwegian foods. Finding the wacky cake recipe in it was a bonus.

I’ve since found the same recipe listed as an eggless, milkless cake, perfect for vegans.

I assume the recipe came from depression days, when prices were higher than many households could afford. Or maybe from World War II when food items, among other things, were rationed. During such times, the eggless, milkless cake recipe may have been normal. But later, as the economy improved and rationing ended, the recipe would become what it is for James and me–a funny cake recipe.

Having succeeded at making the chocolate wacky cake, I now wonder if I could alter the recipe for other flavors. Maybe a lemon version would work with lemon juice substituted for vinegar. I found a white cake recipe online that also calls for apple cider vinegar as an egg replacement, so I’m sure other flavors would work.

Besides, even if there are easier vegan cake recipes, I’d love to discover another one I can make with my grandchildren.