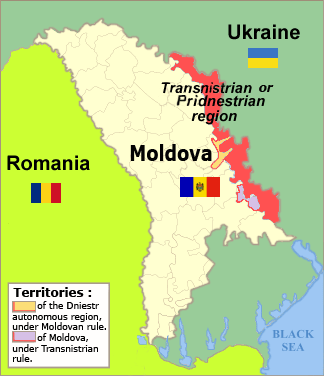 This week I posted a video about Transnistria, a country in limbo at the edge of Europe, on Facebook. The reaction made me realize I haven’t done enough to tell my personal story about living next door to Transnistria.

Here is my story, Traveling Through Transnistria, as published in the Third Edition of The Guilded Pen, the San Diego Writers and Editors Guild 2014 anthology of work by its members.

When the former Soviet Union broke apart in 1992, Transnistria, a sliver of land at the eastern border of Moldova, right next to the Ukraine, wanted to be part of Russia, not Moldova, in spite of the fact that nearly 800 miles separated it from the closest point within Russia. Transnistria continued to use the Russian ruble even after Russia had issued new rubles and stopped accepting the old-style currency as legal tender. The Transnistrians added a postage stamp to the Russian rubles to indicate they were their currency.

Since the collapse of the Soviet Union, Russian troops have been present in Transnistria. At the time my husband, Alex, and I were in Moldova, from 1992 until 1994, General Alexander Lebed was in command of the Russian 14th Guards Army in Moldova. Border skirmishes were frequent between Moldova and Transnistria. However, travel across the border was common and somewhat safe. So, I was delighted when Alex and I were invited to participate in one such transborder excursion.

The Organization for Security and Cooperation in Europe (OSCE), charged with facilitating a negotiated settlement between Moldova and Transnistria, has had a presence in Moldova since the early 1990s. At the time we were in Moldova, the ambassador from the OSCE to Moldova was a Canadian. One weekend, he, his wife, Oksana (one of his local staff), the US Ambassador to Moldova, Mary Pendleton, Alex, and I set off for a relaxing few days in Odessa, on the Black Sea coast of the Ukraine.

We left Friday afternoon in two cars. Ambassador Pendleton, Alex, and I were in one car. The OSCE ambassador, his wife, and Oksana were in the other car, in the lead so Oksana could translate. She was to explain to the guards at the Transnistrian “border,” recognized by neither the US government nor most European nations, why we needed to be given speedy and unimpeded passage through Transnistria to the Ukraine.

Ambassador Pendleton had one condition for this trip—that we must cross Transnistria during daylight. She agreed to the OSCE ambassador’s plan with the understanding that we would return from Odessa in plenty of time to reach the border by 5 p.m.

Oksana had been a university student in Odessa and very eager to show us what Odessa had to offer.  Getting us through the Transnistrian checkpoint was not a problem she assured us. And, just as promised, at the border, Ambassador Pendleton in the follow car was waved through without having to stop.

Once we reached Odessa, we checked in at a private sanitarium at the edge of the city. The name conjured up visions of patients with tuberculosis or schizophrenia, but Oksana explained that the sanitarium had rooms that were converted to accommodate travelers and was a place that offered a relaxing and calming setting. We were the only guests that weekend.

That evening we headed for a meal at a restaurant overlooking the coastline and beach. We found our favorites on the menu, pelmeni (meat-stuffed dumplings smothered in sour cream), cabbage rolls (meat-stuffed cabbage leaves smothered in sour cream), carrot and raisin salad smothered in sour cream. The restaurant was full of very well-dressed, cosmopolitan young couples, some of whom looked as though they had just walked out of a stylish European casino. They were the local businessmen who had quickly figured out how to make money in the new capitalist economies of the Commonwealth of Independent States (CIS), the loose confederation of the former Soviet republics. Most citizens of CIS states considered all businessmen to be part of the Russian mafia. The well-dressed couples made that lifestyle very attractive.

The next day we toured several museums, many of them with a strong military slant. We also went to see the Potemkin steps, originally 200 steps leading from the city situated on a high steppe plateau to the harbor. The steps are now known more for Sergei Eisenstein’s use of them in his 1925 silent film, Battleship Potemkin, about the 1905 massacre of sailors and city residents.

That evening we went to an organ concert where one of the most noticeable acknowledgements of the change in the government was the hole in the flag on the stage curtain where the hammer and sickle had been.

After the concert, Oksana suggested we go to a hotel that was well known for its entertainment.  As she had done at nearly every other stop, she chose that we not park directly in front of the location where we intended to spend our time. Instead, she had the OSCE ambassador drive around the corner from the hotel to locate two parking spots so that the two cars would be parked one in front of the other. I didn’t ask why we didn’t park in front of the location; I just wondered. I should have asked; I didn’t realize why until later.

The next morning, Sunday, and our last day in Odessa, Oksana recommended we have breakfast at a famous downtown restaurant, Varadero, which offered tables along the open windows overlooking the wide veranda, before we headed a short distance out of town to see another Ukrainian Black Sea site.

Although there were plenty of parking spaces directly in front of the restaurant on a very wide sidewalk where others parked their cars, Oksana, again, took us around the corner to park the two cars out of sight, and we walked back to the restaurant.

At the end of the meal, we returned to the cars. As we turned the corner, something was wrong. There was only one car on the street, Ambassador Pendleton’s Honda. The OSCE ambassador’s Lada was missing.

Instead of spending a short time at the other resort after which we planned to travel back through Transnistria, arriving at the border while it was still daylight, we ended up back at the restaurant. Oksana called the police.

Gasoline was in very short supply in all of the former Soviet Union at that time. After speaking with the police, Oksana informed us that if we wanted someone to investigate the missing car, we would have pick-up a policeman in our remaining car. The police had no gasoline.

Once the policeman was on site, he seemed optimistic the ambassador’s car would be found. He recommended that we just wait. In the meantime, Ambassador Pendleton, the OSCE ambassador, and Oksana drove the policeman around, making several other stops so he could file the reports and investigate options.

By 3 p.m., Ambassador Pendleton was concerned that if we didn’t leave soon, we would arrive at the Transnistrian border at dusk.

“Don’t worry,” Oksana reassured us. “I know a short cut that will get us to the border quickly. We don’t have to rush yet. Let’s wait to see if the police can find the car. Besides, there are six of us. We can’t all fit into one car.”

“We can squeeze four people into the back seat,” the Ambassador countered. “It won’t be comfortable, but it will be safer than waiting.”

“The policeman is sure they will find the car soon,” Oksana insisted.

We gave in and agreed to wait. By 5 p.m., Ambassador Pendleton decided waiting any longer was out of the question.

“We can’t wait any longer,” Ambassador Pendleton insisted. “We have to leave now.”

“If you must,” Oksana said. “The ambassador and I will remain here until the police find the car.”

With that, the four of us–Ambassador Pendleton, Mrs. OSCE Ambassador, Alex, and I–piled into Ambassador Pendleton’s car. Now minus the only Russian speaker among us, we headed for the border taking the shortcut Oksana recommended as we watched the sun sink lower and lower. By the time we reached the border, daylight was nearly gone, and it became obvious that we might have trouble. The guards were not in identifiable uniforms. Most of them were very young men, and it was clear that they had been drinking all afternoon.

When we stopped, a guard stumbled as he walked towards the car. His rifle was slung over his shoulder while the other guards were holding their rifles by the barrels, resting the butts on the ground, like walking sticks. This behavior did not instill confidence. The ambassador rolled down the window and showed him her passport. We sat back, trying not to convey our nervousness.

The guard insisted the ambassador get out of the car. She tried to speak with him in Romanian. Ignoring her attempt, he motioned for her to go to the back of the car and he pointed to the trunk, indicating she should open it. She did. But when he started opening the suitcases in the trunk she pushed his hands out of the way and told him—in English which he clearly didn’t understand—that he didn’t have any right to inspect anything in her car because we were all diplomats and her car had diplomatic plates on it.

In a show of absolute bravado, she slammed the trunk shut, got back into the car, put it in gear and drove off. The rest of us, expecting the worst, slunk down into the seats so our heads were below the level of the back window.

It took a few minutes before we all exhaled.

map of Romania, Moldova, and Transnistria from Wandering Earl.