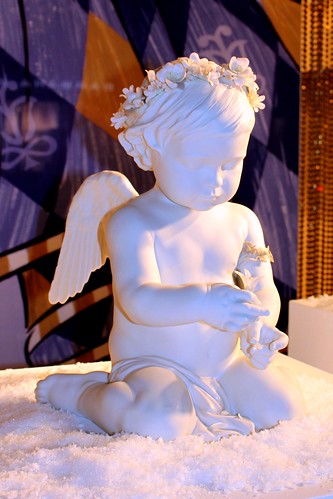 Great were the results of my mother’s prayers. She always got what she prayed for, or so we kids thought. When I complained that prayers didn’t work, Mom insisted that, while God answers all prayers, his answers aren’t always what we want. And then she would remind me of the nights she sat on my bed while I said my prayers, to remind me to ask for God’s help to stop biting my fingernails. And I remembered.
“guardian angel” (CC BY 2.0) by Prayitno / Thank you for (11 millions +) views

Years later, I stopped praying myself, but I know Mom never did. And I believed her prayers directed a guardian angel for each of her children.

For example, when my brother returned from his four-year Navy stint, Mom prayed he would meet a woman like a newcomer at her church. A year or two later, while my parents were away, my sister hosted a party at the house, and my brother dropped in and met that church newcomer, a friend of one of my sister’s classmates. My brother and that newcomer have been married for more than 30 years and have three sons and a granddaughter.

As for me, at 21 I married, graduated from college, and left my parents’ home. Even at that distance, I felt a protecting spirit. My husband and I arrived in Berkeley, California, with enough money for one night in a motel room and the cleaning deposit and first month’s rent for a tiny apartment we found the next day. Had we not found that apartment on that day, or had the landlord required first and last month’s rent, we would have been out on the streets. That night, I thanked my guardian angel.

Good fortune has limits, however. As we entered our third year in Berkeley, my husband decided the marriage wasn’t working. He moved out; I kept the apartment. He took our tent, a sleeping bag, and a bicycle; I kept the borrowed bed and the car I was still making payments on. I had never felt so alone.

To keep in touch with the few people I knew, I wanted to keep the same phone number. The phone company wanted me to set up a new account with a new number. Business practices at that time required I get my husband’s permission to keep “his” number (since another business practice was to issue all accounts in the husband’s name). Businesses presumed an angry wife would run up large bills on her husband’s accounts before a divorce.

I didn’t know where my almost-ex-husband lived and was close to giving up when, suddenly one day, he stopped by the apartment. He signed the form, and I kept the phone number. Such a little detail, but oh, so important for the rest of this story.

By this time, I had decided to go to graduate school and had been accepted at California State University at San Francisco for the following January. I didn’t know how I would pay for it. I would have to quit my job in Berkeley and assumed I would have to find a part-time job in San Francisco. Instead of worrying, I decided to wait to see how things turned out.

Then, one early November morning, I overslept. I was already late, and my hand was on the doorknob when the phone rang. I almost ignored it. But these were the days before answering machines, and my curiosity over who was calling prevailed. I answered the call. On the other end, the producer of a San Francisco television program, Pippa’s Prize Movie, explained my phone number had been selected at random from the phone book (remember those?), and she asked if I was willing to take part in their contest. She mentioned a consolation prize, complimentary dinner for two at a San Francisco restaurant. My mind began running through the names of people l knew, searching for someone I could invite to join me for dinner, as the producer explained she would call me back in five minutes for the contest itself.

During those five minutes, I recalled having read a piece by my favorite columnist, Herb Caen, where he mentioned this contest. I found the newspaper, reread the column, and located what I thought was a clue before the phone rang again. Pippa played a song, barely audible through the receiver of the phone (I didn’t own a TV). When she asked me to name the tune, I said, “I understand it is the theme from the movie, ‘They Call Me Mr. Tibbs.’”

All those events, set up by my guardian angel, and I didn’t know I had the answer.

The next day, Herb Caen mentioned me in his column; Pippa’s Prize Movie became Pippa’s Morning Movie, altering the format by eliminating the prize; and I had five minutes of fame as I received, on air, a check from Channel 7 for $2,219. More than enough for my first semester of graduate school in 1973.

3 responses to “Guardian Angel I”