Book Review: The Genie Who Had Wishes of HIs Own 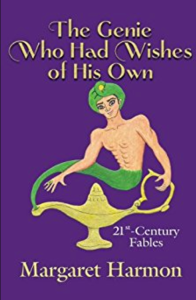 greed, hubris, jealousy, pride, procrastination, living through others, idealism, creativity, wasted opportunities, optimism vs pessimism, and the question of just what is success. Some are reminiscent of traditional fairy tales, especially three involving magic lamps and turbaned genies, “The Ingénue and the Genie,” “Freeing the Genie,” and “The Second-best Juggler in the World.” But none have the predictable ending our childhood tales have taught us to expect.

If the fables had morals–and Harmon insists even Aesop’s fables did not originally include morals until the Victorians, who feared children wouldn’t otherwise learn from them, added them–the likely moral of the first would be “Don’t let perfect be the enemy of good enough,” of the second, “Appreciate every opportunity, especially those that benefit others,” and of the third, “Opportunities aren’t guarantees.” Well, those last three words are Harmon’s, from “The Second-best Juggler in the World.” So I’m certain she would agree with me.

While each fable tells an entire story, there are themes that run through many of them. Seizing the opportunity is a theme that applies not only to the three genie tales but also to others. “Two Young Farmers,” “The Snake in the Terrarium,” and my favorite, “The Track Team,” also deal with recognizing an opportunity or creating an opportunity or of missing out on an opportunity. In “The Track Team” Harmon contrasts three team members who agree there is a problem: their team keeps losing. And they agree something must be done. But each chooses a different solution, leaving the reader to decide which of the three is more likely to succeed. “Two Young Farmers” poses a similar situation, though the outcome is unambiguous: one farmer believes perfection must be found first while the other begins with what he is handed and creates his own opportunity.

One of the longest fables, “The Philanthropist,” presents the scariest of images to me. The title implies the central character is a success, having acquired so much wealth he can afford to give it away. But the moral of this fable involves the means more than the ends.

It may be several years yet before I can tell these fables to my pre-school aged grandchildren. I hope Margaret keeps writing fables to add to these by then.