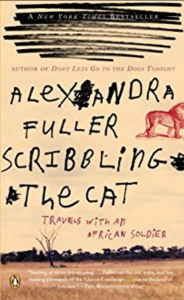 “The windows of the pickup were rolled down because we, in

common with everyone else in this part of the world, were jealous of every drop of fuel we spent. And, under these circumstances, air-conditioning (like the exorcism of war memories and the act of writing about it) was an unpardonable self-indulgence. K had gone quiet and the muscle at the back of his jaw had begun to quiver. Air-conditioning ices memories with its blandness, but with the windows wound down the past came rushing back at K. ‘Do you smell that?’ he asked me more than once, looking at me as if expecting to see the same war-shocked look on my face as he wore on his own. I nodded. But what I was smelling was not what K was smelling. I was smelling now, he was smelling memories.”

In Scribbling the Cat: Travels with an African Soldier Alexandra Fuller tells the story of her return to Zambia in order to travel with K, a soldier who fought in the many wars of independence in East Africa in a search to make sense of what the war had done to them both. Still a child during the wars of independence that turned Rhodesia into Zimbabwe, Northern Rhodesia into Zambia, and freed Mozambique from the Portuguese, Fuller experienced it as a time when both her parents were defenders of colonial way of life. In her first memoir, Don’t Let’s Go to the Dogs Tonight, she recalls being left behind with her sister and mother as her father heads off in camouflage and a blackened face so that he won’t be visible. Fuller the child wants to yell out to him in warning as she watches him walk down the drive leading to their farm that she can still see him, that he must watch out. She also sits at her mother’s feet during her mother’s periods of assignment at the map of lights set up to give white farmers a warning system if attacked. If one of the lights came on, a call to arms would go out to defenders to race to the farm under attack.

Years later, Fuller, now married and mother of two children, returns from her Wyoming home to visit her parents in Zambia. She meets K, a soldier who is still battling demons unleashed during his time as a soldier in the RLI, Rhodesian Light Infantry.

“Because it is the land that grew me, and because they are my people, I sometimes forget to be astonished by Africans.”

Fuller begins her narrative with the lines above. K astonished her because he was still in Africa after years of fighting against the native Africans who were fighting to take possession of the land. K has lost his farm, his son, and his wife. But K has found God. He has turned his life over to God, asking God for guidance every day. K asks God if He has sent Fuller to be with him.

Fuller admits she and K were on the wrong side in the fight. And yet her parents remained. K remained. And she returns again and again, feeling African more than any other nationality in spite of her American husband and Wyoming home. She invites K to return with her to Mozambique, where K spent most of his time fighting to retain possession of African land, in the hopes that she can help him find reconciliation and she can find understanding.

“You can’t rewind war. It spools on, and on, and on. Looping and jumping, distorted and cracked with age, and the stories contract until only the nuggets of hatred remain and no one can even remember, or imagine, why the war was organized in the first place.”

In the end there is no reconciliation, no understanding. There is only the story of “what happens when you stand on tiptoe and look too hard into your own past and into the things that make us war-wounded the fragile, haunted, powerful men-women that we are.”

This is a naked story of warts and wounds and victims of war. Fuller opens up the door to let the reader see her Africa, an Africa she loves in spite of its terrors and dangers. She uses the language those she meets would use, unflattering in its references to black Africans, but without apology. She simply reports.

To any who choose to pick up her story, and I recommend doing so but not until after reading Don’t Let’s Go to the Dogs Tonight, be sure to turn to the back of the book to review the Glossary before diving into this story.