F is for Fargo 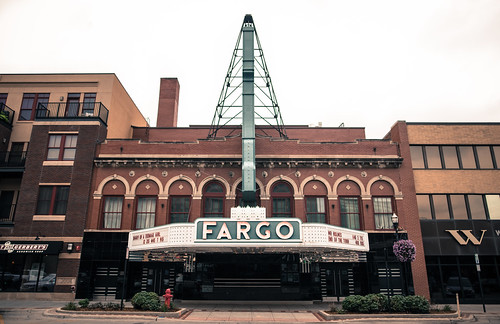 I arrived in Fargo by way of St. Luke’s Hospital, my birthplace. While I never lived in Fargo–my family lived across the Red River of the North in Moorhead, Minnesota–there is no denying that Fargo had a big impact on my life. And initially, all I wanted was to get away from it.

Fargo may be the largest city between Minneapolis and the West Coast, but it was still too small to be called a big city. And I knew I wanted to live in a big city.

My first foray outside of the reach of Fargo was the summer of 1968 when I spent seven weeks living in Union City, New Jersey, while I volunteered at a church in Weehawken, New Jersey, in an arts, crafts, and recreation program. Each weekend I traveled to the biggest of the big cities–New York City. And that’s where I wanted to be.

But the summer ended, I returned to Minnesota, and I continued to dream of ways to get out.

At the end of college, I headed as far as I could get from Fargo without having to get onto a plane or a ship–Berkeley, California. A couple of years later, I traveled even further west to San Francisco. And that’s the big city I chose for the rest of my life.

But that didn’t work.

Still, there is no denying that I come from Fargo. If it weren’t for the cold and snow of winters, I’d probably be back there now. Over the years, Fargo got a little bigger. It got a little more cosmopolitan. It got more diverse. And I got a little older so that I don’t need so much variety. And Fargo is still one of the best places in the world to come from. People in Fargo trust one another and anyone else who comes to town. And that just plain feels good. I probably wouldn’t have been so successful at moving around from place to place and culture to culture if I hadn’t had the solid grounding that just comes with living in Fargo and Moorhead.

But don’t take my word for it. Marc de Celle brought his family to Fargo from Phoenix and found so many examples of how people in Fargo made him feel at home that he wrote a book about it: How Fargo of You.

7 responses to “F is for Fargo”